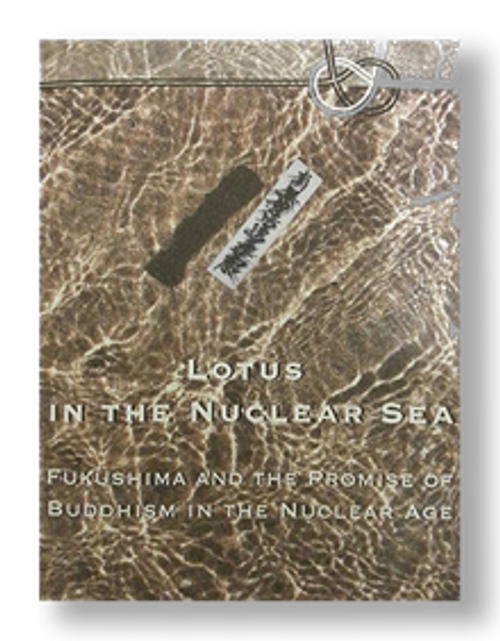 Fukushima and the Promise of Buddhism in the Nuclear Age.

As a result of the 2011 triple disaster of earthquake, tsunami, and nuclear meltdown in northern Japan, the International Network of Engaged Buddhists (INEB) Executive and Advisory Committee drafted and adopted an official statement on nuclear energy.  Lotus in the Nuclear Sea was published by the hosts of the event, the Kodo Kyodan Buddhist Fellowship, in an effort to carry out the action platform of this declaration.  The project is ultimately in support of Buddhist priests and temples serving as centers of sustainable living based on the Buddhist values of sufficiency, care for all sentient beings, and interdependence.

Lotus in the Nuclear Sea documents the heartache and trauma of both those who have remained and those who evacuated the area.  These essays are primarily edited transcriptions from talks given by Fukushima residents that the INEB group visited in November 2012.  It also looks at the work of a wide variety of Buddhists who are contronting and dealing with the crisis.  The last section offers an in depth view on nuclear energy from a a Buddhist perspective with essays by Deep Ecology pioneer Joanna Macy, environmentalist David Loy, as well as Japanese Buddhist activists.

Readings of the Lotus Sutra

Making A Change For Good

Losing the Clouds, Gaining the Sky

Listening to the Other

Lord of the Dance: The Autobiography of a Tibetan Lama