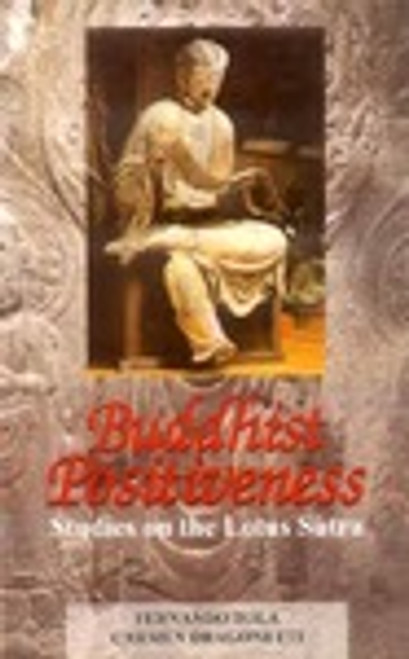 By: Fernando Tola and Carmen Dragonetti
The Lotus Sutra is one of the Buddhist texts which can give a real Idea of the force, originality, influence, and value of the Buddhist Positivene;5s. This essay on Buddhist Positiveness was originally written (in 1994) by Fernando Tola as an answer to the Catholic Pope's criticism of Buddhism, according to which Buddhism is a 'negative' religion; and this essay was presented afterwards, in an abridged version, as a paper, in The International Conference of The International Association of Buddhist Studies held in Lausanne, Switzerland (in 1999). The topics which are dealt with in this book are on the conflict of change in Buddhism; the conflict of change in the Lotus Sutra; apologetics and harmony in the Lotus Sutra and Bhavya; sunyata in the Lutus Sutra; some reflections that the translation of the saddharmapundarikasutra ) from its original text into Spanish) provoked in the authors regarding some linguistic, semantic and communication problems; the meaning of the infinite numbers in the Lotus Sutra; beginninglessness of the Veda and the Dharma, names of the Bhiksus and Bodhisattvas in the Lotus Sutra; Buddhist spirituality: positiveness in the Lotus Sutra; Buddhism and family; attitudes in regard to food in Ancient India, and some important reviews concerning the Lotus Sutra.