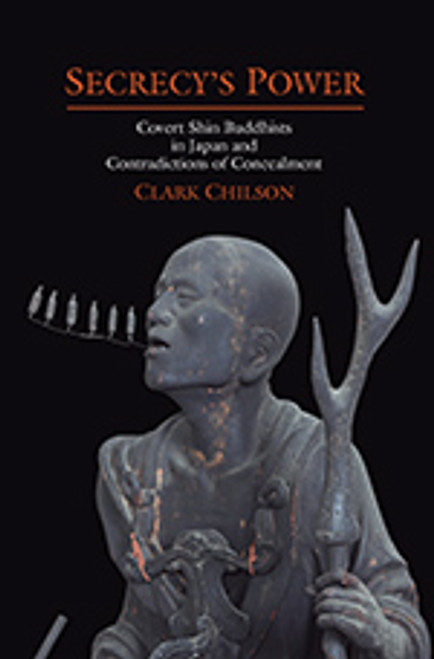 Covert Shin Buddhists in Japan and Contradictions of Concealment.

Shin has long been one of the most popular forms of Buddhism in Japan. As a devotional tradition that emphasizes gratitude and trust in Amida Buddha, it is thought to have little to do with secrecy. Yet for centuries, Shin Buddhists met on secluded mountains, in homes, and in the backrooms of stores to teach their hidden doctrines and hold clandestine rites. Among their adherents was D. T. Suzuki’s mother, who took her son to covert Shin meetings when he was a boy.

Even among Shin experts, covert followers were relatively unknown; historians who studied them claimed they had disappeared more than a century ago. A serendipitous encounter, however, led to author Clark Chilson’s introduction to the leader of a covert Shin Buddhist group—one of several that to this day conceal the very existence of their beliefs and practices. In Secrecy’s Power Chilson explains how and why they have remained hidden.

Drawing on historical and ethnographic sources, as well as fieldwork among covert Shin Buddhists in central Japan, Secrecy’s Power introduces the histories, doctrines, and practices of different covert Shin Buddhists. It shows how, despite assumptions to the contrary, secrecy has been a significant part of Shin’s history since the thirteenth century, when Shinran disowned his eldest son for claiming secret knowledge. The work also demonstrates how secrecy in Shin has long been both a source of conflict and a response to it. Some covert Shin Buddhists were persecuted because of their secrecy, while others used it to protect themselves from persecution under rulers hostile to Shin.

Secrecy’s Power is a groundbreaking work that makes an important contribution to our knowledge on secrecy and Shin Buddhism. Organized around the various consequences concealment has had for covert Shin Buddhists, it provides new insights into the power of secrecy to produce multiple effects—even polar opposite ones. It also sheds light on ignored corners of Shin Buddhism to reveal a much richer, more diverse, and more contested tradition than commonly is understood.

The Power of Now - A Guide to Spiritual Enlightenment