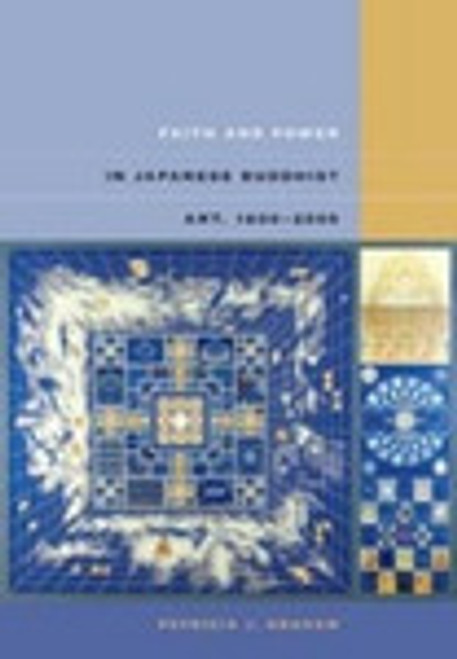 “Over 150 excellent illustrations, with nearly 40 in spectacular color, present a most remarkable gallery of explicitly religious subjects in a profusion of styles and media. . . . Graham achieves an admirably seamless blend of art historical research with religious studies-oriented analysis, and in a very readable text. . . . For readers who want a wonderful introduction to Japanese Buddhist art across a remarkably full spectrum, this book is made to order. And for those already enamored of the subject, Faith and Power is full of wonderful surprises.” —Religion and the Arts (13, 2009)

“[This] book is a major contribution to scholarship in Japanese art history and stimulates further research on Buddhist visual culture in a new direction beyond conventional Japanese art and architectural studies.” —Pacific Affairs (82:3, fall 2009)

“Faith and Power is an important contribution to studies of Japanese religious art in English. As a survey, it is designed to reach a wide audience; nevertheless, it includes so much information available in English for the first time that it admirably serves the specialist as well. Most importantly, the book introduces new areas of inquiry to future generations of students of Japanese art.” —Monumenta Nipponica (64:1, 2009)

“An excellent example of an overview of Japanese Buddhist art done exceedingly well. . . . Like any great introductory book, Faith and Power in Japanese Buddhist Art is immediately accessible to the general reader; but it will also appeal to readers with more background knowledge. Because of its significance to the field, the book is crucial for anyone working on Japanese art, contemporary art in any area, and Buddhist studies in general.” —CAA Reviews (25 August 2008)

“This book is densely written and copiously illustrated, rich with evidence that Buddhist art has thrived over the last four hundred years and continues to do so. One of the book’s many contributions is how it traces the widening patronage of Buddhist art, which helped to create and support a new class of Buddhist artists and appreciation for their art beyond the walls of the Buddhist temples.” —Buddhadharma (Spring 2008)

Faith and Power in Japanese Buddhist Art explores the transformation of Buddhism from the premodern to the contemporary era in Japan and the central role its visual culture has played in this transformation. Although Buddhism is generally regarded as peripheral to modern Japanese society, this book demonstrates otherwise. Its chapters elucidate the thread of change over time in the practice of Buddhism as revealed in temple worship halls and other sites of devotion and in imagery representing the religion’s most popular deities and religious practices. It also introduces the work of modern and contemporary artists who are not generally associated with institutional Buddhism and its canonical visual requirements but whose faith inspires their art.

The author makes a persuasive argument that the neglect of these materials by scholars results from erroneous presumptions about the aesthetic superiority of early Japanese Buddhist artifacts and an asserted decline in the institutional power of the religion after the sixteenth century. She demonstrates that recent works constitute a significant contribution to the history of Japanese art and architecture, providing evidence of Buddhism’s compelling presence at all levels of Japanese society and its evolution in response to the needs of new generations of supporters.

Patricia J. Graham, a former professor of Japanese art and culture, and museum curator, is an independent scholar and Asian art consultant based in Lawrence, Kansas.

Flowers of a Chaotic Era: Rennyo and the Ashikaga Shogunate