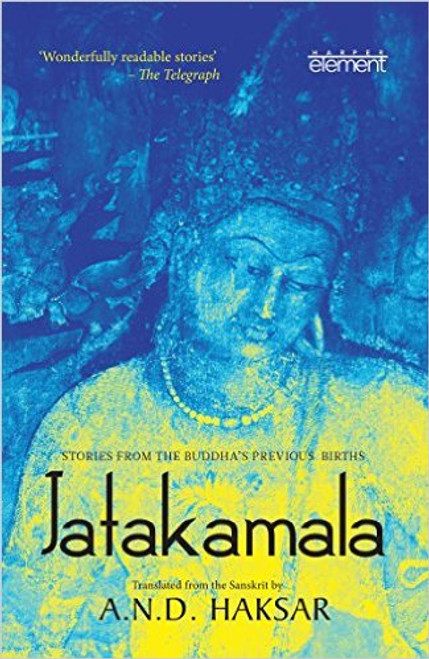 Stories from the Buddha's Previous Lives - Translated from the Sanskrit by A.N.D. Haksar.

The Jatakamala is a famous work in both sacred Buddhist and classical Sanskrit literature. It recounts thirty-four stories of the Buddha's previous births, and his good deeds in those earlier incarnations as a god, man or an animal. Written in elegant Sanskrit prose and verse in the fourth century A.D., these tales were later translated into Chinese and Tibetan. Several feature in the Ajanta cave paintings. Their colourful backgrounds range from a sea voyage to a battle scene, a forest fire to a royal hunt and from the charms of the harem to the horrors of hell. Popular through the ages, they remain highly readable today, both for their timeless message of compassion and concord, and the vivid, dramatic imagery with which it is presented. Twelve of these tales are not found in any other collection including the Pali Jataka texts. Arya Shura, the author of the Jatakamala, is known in tradition as a saintly teacher and an authority on prosody. In all probability he was a Buddhist monk. No details are available of his life, except that he wrote several other works, some of which are extant only in Tibetan and Chinese translations.

Aditya Narayan Dhairyasheel Haksar was born in Gwalior and educated at the Doon School and the universities of Allahabad and Oxford. A well-known translator of Sanskrit classics, he has had a distinguished career as a diplomat, serving as Indian high commissioner to Kenya and the Seychelles, minister to the United States, and ambassador to Portugal and Yugoslavia. His translations from the Sanskrit include Subhashitavali, Kama Sutra, Three Satires from Ancient Kashmir, The Courtesan's Keeper and The Seduction of Shiva, all published as Penguin Classics. Some other books are Shuka Saptati (Rupa and Co.) and Madhav and Kama (Roli Books). He has also edited Glimpses of Sanskrit Literature and compiled A Treasury of Sanskrit Poetry for the Indian Council for Cultural Relations.
×

Can I Play Too?