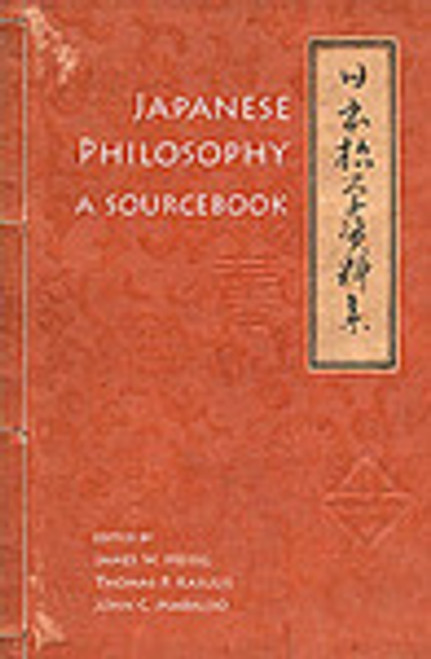 With Japanese Philosophy: A Sourcebook, readers of English can now access in a single volume the richness and diversity of Japanese philosophy as it has developed throughout history. Leading scholars in the field have translated selections from the writings of more than a hundred philosophical thinkers from all eras and schools of thought, many of them available in English for the first time.

The Sourcebook editors have set out to represent the entire Japanese philosophical tradition—not only the broad spectrum of academic philosophy dating from the introduction of Western philosophy in the latter part of the nineteenth century, but also the philosophical ideas of major Japanese traditions of Buddhism, Confucianism, and Shinto. The philosophical significance of each tradition is laid out in an extensive overview, and each selection is accompanied by a brief biographical sketch of its author and helpful information on placing the work in its proper context. The bulk of the supporting material, which comprises nearly a quarter of the volume, is given to original interpretive essays on topics not explicitly covered in other chapters: cultural identity, samurai thought, women philosophers, aesthetics, bioethics.

An introductory chapter provides a historical overview of Japanese philosophy and a discussion of the Japanese debate over defining the idea of philosophy, both of which help explain the rationale behind the design of the Sourcebook. An exhaustive glossary of technical terminology, a chronology of authors, and a thematic index are appended. Specialists will find information related to original sources and sinographs for Japanese names and terms in a comprehensive bibliography and general index.

Handsomely presented and clearly organized for ease of use, Japanese Philosophy: A Sourcebook will be a cornerstone in Japanese studies for decades to come. It will be an essential reference for anyone interested in traditional or contemporary Japanese culture and the way it has shaped and been shaped by its great thinkers over the centuries.

Insight Meditation - The Practice of Freedom