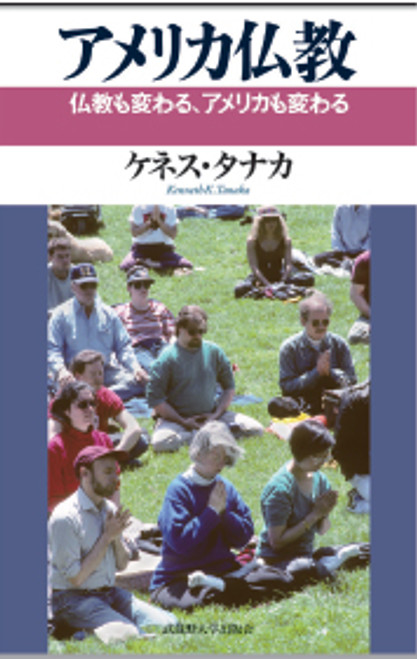 In Japanese only
Dr. Kenneth Tanaka has just completed his new book, entitled Amerika bukkyo: bukkyo mo kawaru, amerika mo karwaru (American Buddhism: Buddhism is changing and America is changing). This is his first book written in Japanese and took ten years to write. Dr. Tanaka had already published in English on America Buddhism while on the faculty at the Institute of Buddhist Studies, but he began planning for a book for the Japanese readers upon arriving in Japan 11 years ago. Dr. Tanaka reports that the Japanese readers of his book are pleasantly surprised to learn about the extent of the growth of Buddhism in America (Buddhists currently number 3 million or 1 percent of the U.S. population). Many of his progressive Japanese Buddhists are hopeful that there would be a "re-import" phenomenon of sorts, whereby the "student" (U.S.) could inspire the "teacher" (Japan), who may be showing signs of slowing down, unable to effectively adapt to the changing times weighed down by traditionalism and sectarianism.
Hardbound
×

Ajatasatru: The Story of Who We Are

A Tri-Lingual Glossary of the Sukhavativyuha Sutras