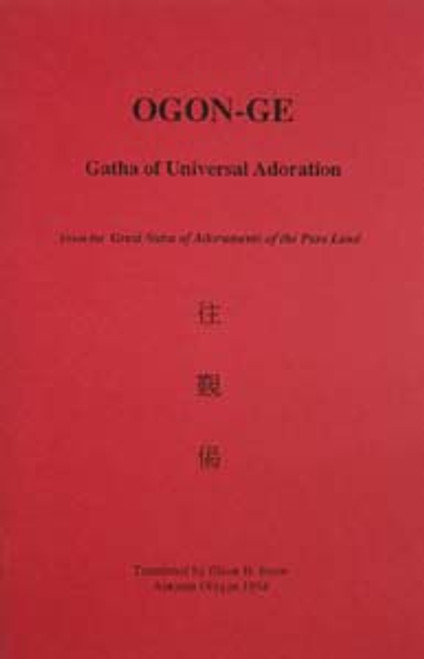 By: Elson B. Snow
A translation of the Ogon-ge (Gatha of Universal Adoration) taken from the Larger Sutra of the Buddha of Immeasurable Light.

The gatha refers to the transcendent teaching of Mahayana emphasizing the altruistic career of the Bodhisattva, and belief that illusory humanity is motivated by wrong beliefs toward existence.

The visionary text is also a spiritual handbook for Pure Land Buddhists, marking the deep rooted practice prescribed by the Tathagata of Infinite Light and Infinite Life.  The sutra, in this particular case, was delivered by the historical Buddha during one of his mystical attainments whose samadhi was recognized by the arahat, Ananda and Bodhisattva Avalokitesvara.  The meditative qualities of the gatha provides an opportunity for acquiring insight into Buddhist experience, and a catalyst for understanding the belief system of Pure Land Buddhists.

The frontpiece illustration is a photo of Prince Shotoku installed in the San Francisco Temple of the Nishi Hongwanji branch of Jodo Shinshu Buddhism.  It was taken by layman Isao Tanaka.  The wasan, indicating the bodhisattva status of the prince composed by Shinran Shonin, reveals the role given to the emanating presence of the profound vow-power of the buddhas in this world.

Out of the Buddha's Shadow