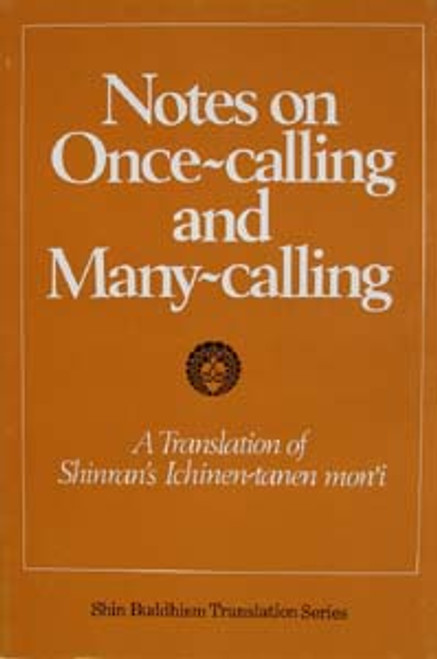 Buddhist paths to enlightenment are all founded on "practice" - the study and discipline that lead to religious transformation.  How can a person incapable of severe monastic training attain enlightenment?  In confronting this question, Honen revealed a new dimension of Buddhist thought, for he taught that through Amida's Primal Vow to save all beings, one can receive the Buddha's virtues by saying his Name in sincere trust.

A controversy arose among Honen's disciples over the proper attitude in practice: should emphasis be placed on saying the Name just once with faith in the complete sufficiency of the power of the Vow ("once-calling"), or is it important to devote oneself to the nembutsu without negligence throughout one's life ("many-calling")?

What, in fact, does it mean to attain birth in the Pure Land through the Nembutsu?  In his Notes on Once-Calling and Many-Calling, Shinran delves into the significance of true entrusting (shinjin) and saying the Name.  For Shinran, total trust is not an attitude that the practicer can assume, but comes about naturally when he has awakened to the great compassion that brings him to Buddhahood just as he is.  This awakening is itself brought about by Amida.  It is the emergence in a person's life of the working of the Primal Vow, which is beyond all time.  In the realization of shinjin, which takes place in the briefest instant of the immediate present - "time at its ultimate limit" - the bonds that tie one to a life of empty repetition in samsaric time are broken forever.

Notes on 'Essentials of Faith Alone'

Notes on the Inscriptions on Sacred Scrolls