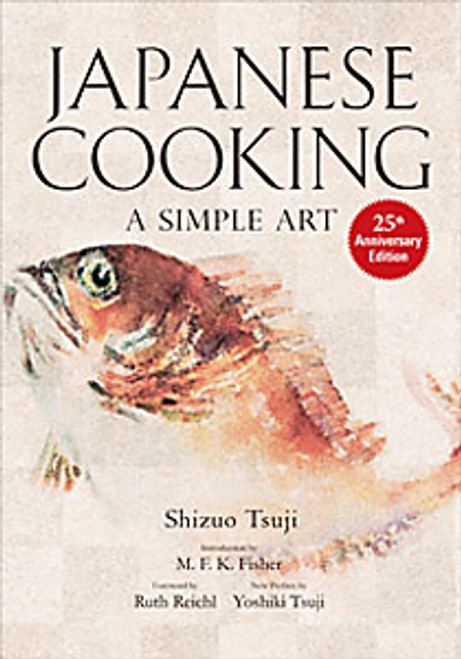 By Shizuo Tsuji
Since its release twenty-five years ago, Shizuo Tsuji's encyclopedic and authoritative work has been the acknowledged "bible" of Japanese cooking. Unrivaled in its comprehensive explanation of ingredients, tools, and techniques, the book guides readers through recipes with clear prose, while technical points are made understandable with deftly executed line drawings.

Much more than a collection of recipes, the cookbook is a masterful treatise on Japanese cuisine. In his preface, the author (who was truly a Renaissance man of Japanese and world gastronomy) discusses the essence of Japanese cooking, with its emphasis on simplicity, balance of textures, colors, and flavors, seasonal freshness, and artful presentation.

After introducing ingredients and utensils, the twenty chapters that make up Part One consist of lessons presenting all the basic Japanese cooking methods and principal types of prepared foods¿making soup, slicing sashimi, grilling, simmering, steaming, noodles, sushi, pickles, and so on¿with accompanying basic recipes. Part Two features 130 carefully selected recipes that range from everyday fare to intriguing challenges for the adventurous cook. Together with the recipes in Part One, these allow the cook to build a repertoire of dishes ranging from the basic "soup and three" formula to a gala banquet.

Still the foremost source book of cooking concepts and recipes from Japan, the 25th Anniversary Edition of Japanese Cooking: A Simple Art invites a new generation of readers to take a journey to the heart of one of the world's great culinary traditions.
×