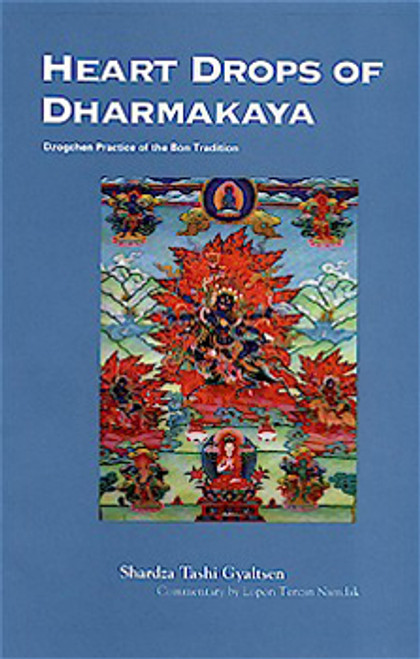 Dzogchen Practice of the Bon Tradition
By Shardza Tashi Gyaltsen
Commentary by Lopon Tenzin Namdak
Here for the first time in English is a complete Dzogchen meditation manual freom the ancient religious tradition of Tibet known as Bon. The Kunzang Nying-tig by Shardza Tashi Gyaltsen is a powerful and practical instructional text which cuts to the heart of Dzogchen meditation. Dzogchen is regarded by Bonpos as the highest and most esoteric religious practice.

Written in the style of personal instruction from Shardza to his students, the manual is supplemented with a commentary by Lopon Tenzin Namdak, who is himself an acknowledged master of Dzogchen. The translation was carried out by Lopon in the course of teaching the text to Western students at his monastery in the Kathmandu Valley.

The book has four parts: preliminary practices, the practice of trekcho, the practice of togel, and bardo and phowa practices. Also included are a discussion of the rainbow body, a short history of Bon, and biographies of the authors.

Shardza Tashi Gyaltsen (1859-1935) was born in the Kham region of Tibet. An unusually gifted child, he became a monk at age nine. At thirty-four, he retired to a mountain hermitage where he passed the rest of his life in retreat- meditating, writing and teaching students from both Buddhist and Bonpo backgrounds.

Lopon Tenzin Namdak was born in 1926 in Eastern Tibet. He is the founder and Master of Studies of the Bonpo monastic colleges at Dolanji, India and Kathmandu, Nepal.

"This is one of the most important books in Dzogchen as demonstrated by the author, Shardza Tashi Gyaltsen, who attained the rainbow body. My kind root master, Lopon Rinpoche's clear and direct commentary elucidates all the major points of this essential text."--Geshe Tenzin Wangyal Rinpoche, author of Tibetan Yogas of Dream & Sleep.

Heartwood: The First Generation of Theravada Buddhism in America