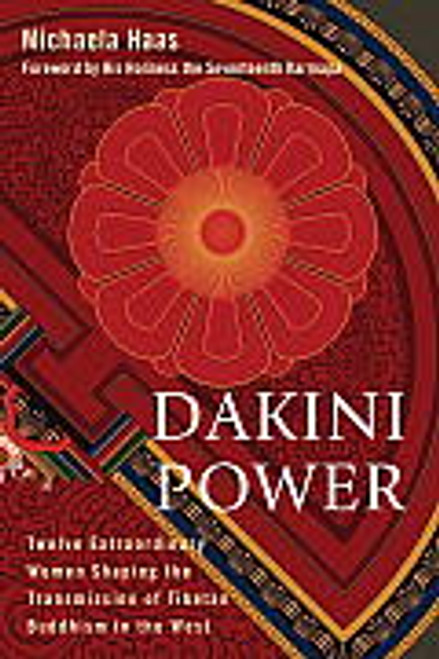 By Michaela Haas with Foreword by His Holiness the Seventeenth Karmapa

Many of us dream of exchanging our day-to-day responsibilities for a heartfelt life full of purpose, but few of us ever get around to doing something about it. The women featured in Dakini Power — contemporary teachers of Tibetan Buddhism, both Westerners and Asians, who teach in the West — are the exception. All twelve women followed their intuition against all odds, made dramatic and unusual decisions, and sometimes had to fight for their survival in order to lead the lives they envisioned. All were criticized — for being too conservative or too rebellious, too feminist or not feminist enough — yet they pulled through with immense determination and bravery. Today all are recognized as accomplished practitioners and brilliant teachers.

What can we learn from these women? How do they handle the cultural differences? How do they deal with the more controversial aspects of Buddhism? The Westerners among them risked alienating their families and closest friends by immersing their lives in a completely foreign culture. Often, this necessitated radical life changes. What did they find on their journey? Was the price they paid worth it to them?

Dakini Power honors the lives and accomplishments of these female pioneers of Buddhism in the West, not least because they seem to have bridged gaps that many of us struggle with. Meeting them in this book, the reader will be inspired in the same way: to let go of old fears, explore new paths, and listen to one's inner voice with confidence.

• Dagmola Sakya (Princess in the Land of Snows)

• Tenzin Palmo (Diane Perry) (Into the Heart of Life)

• Pema Chödrön (Deirdre Blomfield-Brown) (When Things Fall Apart; Start Where You Are)

• Khandro Tsering Chödron (most familiar to readers as the late aunt of Sogyal Rinpoche, author of The Tibetan Book of Living and Dying)

• Roshi Joan Halifax (Being with Dying)

• Elizabeth Mattis-Namgyel (The Power of an Open Question)

The Transmission of Shin Buddhism in the West