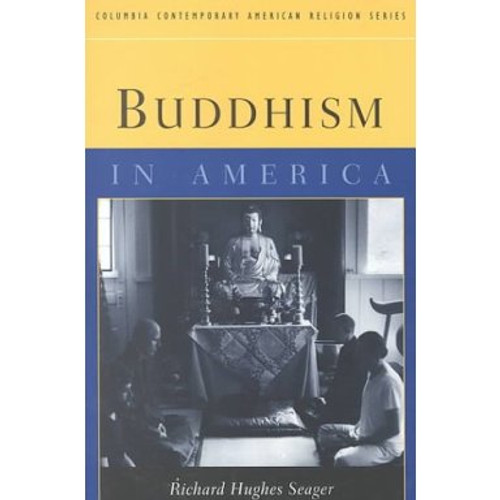 By Richard Hughes Seager
With a history stretching back to ancient India, Buddhism has influenced American culture since the American Transcendentalist movement in the 1830s and '40s. Only in the past few decades, however, has this transplanted philosophy begun to blossom into a full-fledged American religion, made up of three broad groups: a burgeoning Asian immigrant population, numerous native-born converts, and old-line Asian American Buddhists. In Buddhism in America, religious historian Richard Seager offers a perceptive and engaging portrait of the communities, institutions, practices, and individuals that are integral to the contemporary Buddhist landscape.

The book begins with a brief survey of Buddhist beliefs-the story of the Buddha's life, the meaning of enlightenment, realization, the cultivation of nonattachment, and other core concepts¿and Buddhist history in both Asia and the United States. In part 2, Seager presents six well-crafted profiles of Buddhist traditions that have been brought to the United States from Japan, Tibet, Southeast Asia, and elsewhere. This section highlights challenges and problems that have come with transporting and adapting an Asian religion to late twentieth-century America: Who can teach and who can lead? What are the proper roles of laypeople and monks in a society lacking a strong monastic tradition?

The last section takes up the general theme of Americanization, looking at recent developments in three important areas¿gender equity, progressive social change, and intra-Buddhist and interreligious dialogue. Arguing that the gulf between recent converts and new immigrant communities is the most prominent feature of the contemporary scene, Seager assesses American Buddhism as a whole and looks into its future: Will the dharma, traditional Buddhist teachings, be watered down to suit the lifestyles of middle-class, consumerist Americans? Will this highly decentralized religion develop strong national associations, as Catholicism and Judaism have? What institutions¿universities, monasteries, or dharma centers run by and for laypeople-will be most effective in preserving and developing an American Buddhist tradition? This lucid survey lays the foundations for understanding one of the United States' most vital new religions.

Buddhacarita In Praise of Buddha's Acts