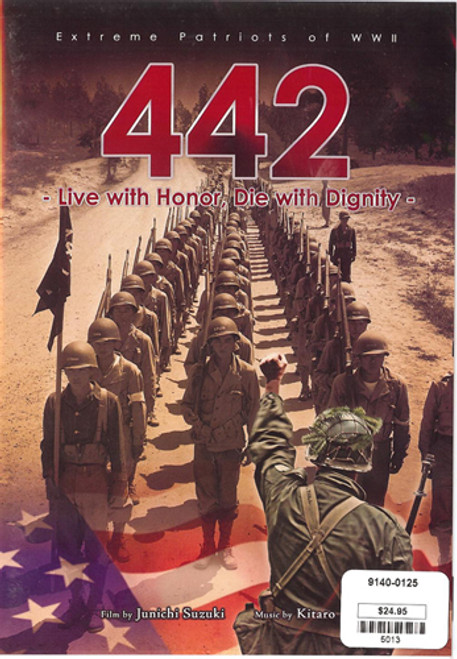 Just Released!!
Written and directed by Junichi Suzuki. Music by Kitaro.
During WWII, soldiers of the 442nd Infantry Regiment, composed mainly of Japanese Americans, fought not only the enemy, but fought prejudice, facing severe racial discrimination in their homeland. In these harsh times however, the 442nd became one of the most decorated regiments for its size and length of service in the history of the United States military.
The 442nd was in an ironic predicament, fighting for a country that had branded them as enemies. However, these young men volunteered to fight and prove their loyalty as patriotic Americans, which defined their identity as they risked their lives for the cause. This film aims to reveal the history of the 442nd Infantry Regiment that is relatively unknown to not only the Japanese but also Americans.Includes interviews with Senator Dan Inouye, George Takei and narration by Lane Nishikawa. This film is the second installment of the Japanese American trilogy following Toyo's Camera -Japanese American History during World War II. UTB, a bilingual Japanese television station in the U.S., and Film Voice in Japan is proud to jointly produce this second installation of the trilogy in an effort to contribute to the Japanese American Community in Los Angeles.
Running time: approx. 97 min.

A Collection of Important Odes of the Law

A Comprehensive Commentary on the Heart Sutra

A Heart As Wide As The World